The world is currently in the midst of its 4th Industrial Revolution, which is being driven by automation and information. The rise of the use of robotics in numerous industries has caused real concern for the future of many jobs. According to Pew Research, 72% of Americans express wariness or concern about a world where machines perform many of the tasks done by humans.

The rise of robots

There are many things that robots can do better than humans. They will always have the advantage when it comes to tasks that involve heavy lifting, precise motions and exact repetitions. They possess more strength, endurance and accuracy than humans, which has resulted in the loss of numerous manufacturing jobs. Another advantage of robots in the thankfully more safety-conscious present day is an ability to work in hazardous environments.

Beyond the manufacturing industry, automation is growing in a variety of sectors. Widely known are the self-checkout tills in supermarkets and service kiosks in retail, but robots have also been introduced in several surprising workplaces. In hospitals, robots have been delivering trays of food and drugs, cleaning linens, disposing of waste, and safely lifting patients for a number of years. In 2014, the University of Birmingham introduced its first ever robot security guard, Bob. Bob stands at 5 feet 10 inches tall and scans rooms to detect anything out of the ordinary. In South Korea, children are even learning English from a robot teacher, Engkey. The trend of introducing robots into new, unexpected vocations isn’t going away anytime soon.

Robots may well be taking over a number of jobs, but there will always be a need for human intervention between the jobs that robots do, and those jobs operated by technical and operational teams. Automation alone is not the best way to increase productivity. Striking the right balance of a human and robot workforce is the modern path to success in manufacturing. It is important to recognise the advantages us homo sapiens have over our mechanical counterparts. For example, robots excel when it comes to prescribed tasks but typically cannot handle unexpected situations. They are also unable to improve on the job without reprogramming as they are unable to learn from situations in the same way we can. And if a robot malfunctions, fixing the issue not only costs money but time too.

The automotive industry was among the first to truly embrace the widespread use of robots on factory floors. In this sector, there are a number of case studies that prove companies cannot simply replace people with machines and expect instant results. An appreciation of the types of tasks robots do more effectively, and in contrast the jobs that require the human touch is the key to success. Leading car companies have almost completely automated their paint and body shops. These types of jobs require constant repetition and consistent quality. On the contrary, assembly lines, which deal with the vast amount of options in today’s customised vehicle market, rely heavily on people due to the flexibility and personal touch required. An ability to understand the costs involved in automation is also a deciding factor when it comes to the success or failure of a business. One European auto plant that invested 10 million euros in technology that would install windshields on cars on the assembly line, replacing the people who once did the job. They were initially more consistent, but it turned out that maintaining such highly sophisticated technology required twice as many workers as company had employed in the first place.

Due to the growing number of robots and automated systems in manufacturing facilities, more maintenance and technical work is required to make sure they are operating efficiently. This is creating a real need for multi-skilled people who can operate, monitor and maintain machines, as well as repair them when they malfunction.

Head counts have not plummeted in the most proactive, future-ready and cost-effective operations, but workers are now expected to possess a wider array of skills. A more automated assembly line means that businesses will require their employees to be multi-skilled and technically savvy.

Getting the most out of your non-robotic workers

With more pressure on modern-day employees to be multi-skilled and productive, it is key to ensure that they have a working environment which allows them to perform to their full capabilities. It’s no use hiring someone with a plethora of skills if their workspace prevents them from utilising them. Human Workspace can help your business maximise its potential with a full workplace assessment. We can then tailor solutions and equipment to suit your needs and help you grow.

Find out how we help our customers increase their productivity and become future-proof, then give us a call on 01273 704520 to chat about your needs. 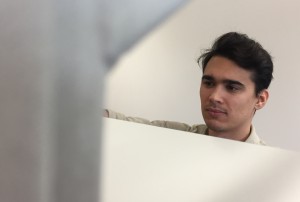 Human Workspace wholeheartedly supports the IET’s (Institution of Engineering and Technology) ‘Engineering Work Experience for All’ campaign, which aims to highlight the importance of work placement and internships for engineering students.

We spoke to Rafael, a recent engineering graduate who is interning as a Design Technician at Human Workspace, about his experience with us so far.

What were you doing before you joined us at Human Workspace?

I qualified in mechanical engineering from University Carlos III in Madrid before coming to the UK to gain more professional experience and to improve my English. My course was unique in that it was taught primarily in English with a small element in Spanish so coming to the UK to work wasn’t quite as much of a challenge!

What have you gained so far from the experience?

It’s been useful to visit so many different manufacturing environments as although each one is different, there are obvious similarities between them – some good, and some not so good! Part of my role is to analyse the not so good issues and help address them, primarily through improved workspace layout and appropriate furniture.

What current projects are you working on?

I’m working on a range of projects, from carrying out manufacturing process assessments to designing manufacturing cells all with the aim of increasing productivity and workflow. I’m also exploring ergonomics in the workplace and developing a range of ideas that help address the health issues associated with prolonged sitting, specifically in the manufacturing environment.

What improvements do you believe the manufacturing industry should be looking to make in the near future?

There’s increasing evidence that sitting for too long slow the metabolism and is linked with obesity, some types of cancer, and early death. Prolonged standing has also been linked with ill-health but with increased awareness of the health benefits as well as improved productivity through the use of sit-stand workspaces, these issues may soon be a thing of the past. It’s amazing that a workstation that facilitates the seamless switching between sitting and standing throughout the day can potentially not only improve someone’s life but actually extend it!

What are the most interesting parts of your current projects and why?

Taking a problem and creating the perfect solution for each individual customer’s requirements. I enjoy working out the best way to address a problem within a budget and creating something that actually helps improve a company’s efficiency.

What are your personal goals for the future?

I’m hoping to play for Real Madrid(!) but if that doesn’t happen, I’d like to improve my English and my engineering skills and eventually have my own international company!

Find out how Rafael and the rest of the Human Workspace team can improve productivity in your place of work through ergonomic workspace design and give us a call on 01273 704520 to chat about your needs.